Climate Emergency Manchester believes that only with a huge upsurge in citizen activity, with groups that are strategic, densely-linked and genuinely innovative and welcoming, can we get any meaningful change in this city.
One way we are trying to contribute to the building of such networks is by offering guest posts/doing interviews with groups. Today it’s the Mcr Green New Deal Podcast. If you know of a group that would like a profile, have them email us on climateemergencymanchester@gmail.com

We are ‘The Mcr Green New Deal Podcast’, a collective that is made up of members of Mcr Labour for a Green New Deal. The aim of the podcast is three fold: 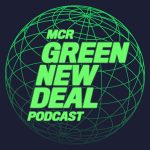 1. It is a way of developing the easily understood but hard to define concept of a ‘Green New Deal’. Our ethos is that no group has a monopoly on ‘the truth’. Different groups function on different levels and some have acquired access to some forms of truth, so let’s come together and hear and debate these ideas and try to grow and put forward the strongest possible concept of what a GND should be.

2. To help educate and support environmentally conscious Labour members who believe that a GND has to be fought for within our current mainstream political system.

3. We want to create a platform that helps to highlight and amplify as many local environmental groups and campaigns as possible.

2.What are the 2021 goals for your organisation?

To survive! And if we manage to do that then we have plans for a new website, and we also have two burning desires. The first is to try and bridge the gap between talking to an environmental echo chamber and talking to those who generally don’t think or discuss ecological issues. The second is to enhance our activism both within Labour and throughout Manchester. We know these goals sound broad and obvious but we have evidence that people who have never listened to discussions on ecology are now listening to our show on a regular basis and the Retrofit get-in project was activism that we are really proud of. If we can build on this then we’ll be very happy.

3. If people get involved with your group, what sorts of things would they end up doing?

If people want to get involved specifically with the podcast then we are looking for anyone that has any kind of media skills. Primarily we could do with another sound editor and help with our website and social media. However, if the passion is there then we are open to any and all ideas. We want to become as resilient as possible so that the podcast doesn’t rely too heavily on any one person but for that, we need a network of people that have multiple skills, creative ideas, and a burning desire to change the world. If that’s you, then get in touch!

4. What are the specific skills and knowledge you’re lacking?

For us to be more resilient we really need an extra sound editor to not only take the pressure off Andrew, who is the show’s producer, but also to extend the types of shows that we can offer. We are also pretty woeful at social media and promotion of the show. We would also love to have video content of the shows in the future, but currently do not have the skills to make this a reality.

5. Complete this sentence: “For Manchester to become more sustainable/less unsustainable, in the next six months…. (and you can answer that question either with “the council needs to” or “citizens need to” or both)

The council needs to stop compartmentalising Climate Breakdown into one department or another and treat every single decision through the lens of ‘how will this decision decrease our carbon emissions and increase bio-diversity’? Councillors need to reimagine their roles as fulltime climate warriors who fate has deemed to lead Mcr in an existential fight of all the planets species. The council needs to massively increase both its democratic structures as well as its transparency so that as many people as possible can feel empowered and a part of decisions that will be spoken about through the ages (if, of course, there is anyone left to speak about them). Climate education needs to become central to our school’s curriculum. Disability rights need to be put front and centre of a just and equal green transition, and there needs to be a massive amount of funding for training in future proof green industries such as retrofitting and the care sector.

Citizens need to form a collective narrative that doesn’t hold people to their previous sins and feelings of guilt. We have to become both aspirational and realistic in what individuals can achieve and make people feel that the value of what they are doing today, in regards to creating a better tomorrow, is enough as long as it is sincere. We need to be less judgemental of groups that don’t resonate with everyone and respect that climate action is coming from a good place with no blueprint for success. And we have to look after each other because when this system starts to crumble, as it will, it will be our collective spirit, resolve and compassion that drags us out of this and builds something new.