Write to your councillors to get a climate scrutiny committee that magnifies real action.

Shopping lists matter. This remark may reveal a narrowing of horizons after a year of lockdown. Or indicate someone who likes food far more than a slight frame suggests. But shopping lists also matter because they are a good example of how a few words – seemingly technical, factual, neutral – can determine what happens next. 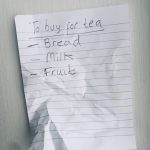 Will any bread do? Milk is a minefield. And ‘fruit’ hardly tells me what to get. It’s not even clear that anyone would be able to make a substantial meal from the list here – isn’t there a whole set of items missing? And isn’t it time we moved from a laboured metaphor to the call for action?

Soon we will know the wording of the proposed revisions to the scrutiny committees Manchester City Council. Last week, Climate Emergency Manchester released a 4-page briefing paper setting out a series of recommendations for the remit, membership, format of a rejigged Climate and Environment Scrutiny Committee. The briefing paper also set out proposals for the work plan of the committee in 2021-22.

The report that all councillors will be asked to approve on Wednesday 31st March is unlikely to set out its case in detail. More likely is a short wording and a series of topics (much like a shopping list) that will fall under the remit of a committee. These may all look fine. All the listed issues may be important areas that form part of the response to the climate emergency, issues that a committee should cover. But what might be missing? What might drastically limit the ability and ambition of this committee?

To be clear, we are not asking for the agenda of the next ten meetings to be drawn up now. We know that constitutional change will be ‘high level’. But unless the points above are made explicit, we run the risk that the committee is little more than a reshuffle and a rebranding.

The next four weeks are crucial in getting the strongest set of proposals.  Four weeks today, on Wednesday 31st March, all councillors of Manchester City Council will debate and vote on the proposals. So if you live in ANY of the 32 wards of Manchester, please contact your three ward councillors and ask them to make the proposals bold, far-reaching and ambitious. We have a letter template here and also an open letter for individuals to sign.

If this whets your appetite, you could then write to the Leader, Richard Leese. Just don’t ask him to do your shopping.

🚨 STATEMENT ON VERDICT & WHAT YOU CAN DO 🚨

Firstly, we need you to read about these boys. Articles based on the prosecution’s racist narrative will try to tell you who they are.

We wanted to share some reflections on the boys ⬇️ link to full text: https://bit.ly/3ws6zC8

A talk next week with a researcher who 'examines the impacts of climate change on glacial activity and meltwater dynamics, as well as present-day Arctic glacier retreat'. Not heard much positive news on that recently! https://theconversation.com/ipcc-report-paints-catastrophic-picture-of-melting-ice-and-rising-sea-levels-and-reality-may-be-even-worse-124193

Good thread on the use of language by local politicians to dampen social movement demands on climate and the environment. https://twitter.com/ClimateEmergMcr/status/1526860840380551169

Good reporting by @josephtiman about this saga in which someone is now in intensive care. We really hope they recover. A few points of concern 🧵 https://twitter.com/MENnewsdesk/status/1526798119664492545

Lib Dem councillor John Leech accuses Labour of breaking a long-standing consensus about members allowances. He says this was done to make it 'increasingly difficult' for the opposition to hold the ruling group to account #LDReporter