Five weeks today, on Wednesday 31st March, the elected councillors of Manchester will vote.  The outcome of the vote may mean that Manchester starts to respond with sufficient vigour to the threat of climate change.

A decade of spin and evasion has brought us to this: a quarter of the city’s carbon budget for the rest of the twenty-first century has been burnt through in the last two years.

Five weeks from today, councillors will vote on whether to keep with a version of the existing failed arrangements, or instead be bold and pioneering.

Their votes will, in large part, be determined by … you.

Councillors rarely get people saying “do more on climate change”.  It’s mostly local issues (dog shit, pot holes). That can and must change. It will change when you take action. 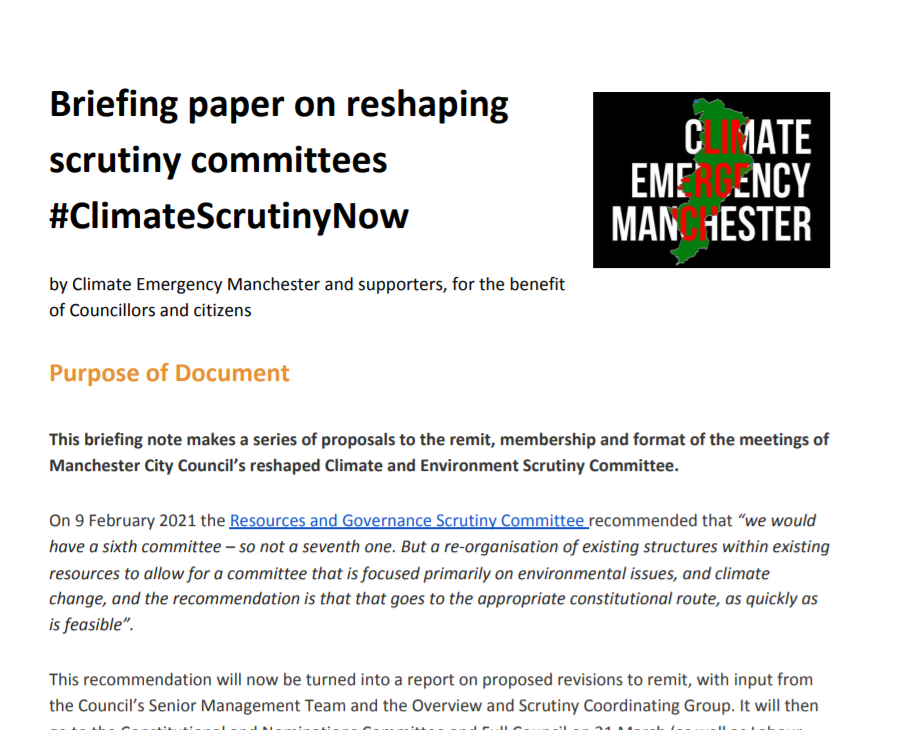 Today, Climate Emergency releases a four page briefing note about what a new scrutiny committee could look like: its remit, its membership, the way it functions.

None of this is in the least bit sexy.  But it is crucial.

Our briefing paper concludes (spoilers!) with the following-

The Council has an opportunity here to model an openness, and willingness to engage in sometimes difficult dialogue, learning from both the expertise available in our city as well as from the points of resistance to climate action internally and externally. We hope that it will seize the opportunity.

The pledge commits people to contact their three councillors. (We hope that all councillors across the City’s 32 wards will contacted, and for them to be asked to make the recommendations as strong as possible). It also commits to people writing to leader of the Council, Sir Richard Leese.

We are also contacting organisations in the city to ask them to sign an open letter, which we will release on Monday 8th March.

We hope to release videos, to bring our meme-game.

We would love your help – if you’re a graphic designer, a video-maker, or someone with a little time to help a campaign dedicated to showing that local democracy can help tackle the climate emergency. Our email is contact@climateemergencymanchester

3 thoughts on “You can shape Manchester’s future, by calling for #RealClimateScrutiny = write to your councillors”