Here’s the lowdown on the petition campaign, as of October 13th. Read on to find out what we’ve been up to, and how you could pitch in.

Online, scores of people signed the petition. After breaking the 500 mark, the numbers shot up to 600 and counting. The online signature numbers are now higher than for the petition calling on the Council to declare a climate emergency in 2019. No community campaign group has recorded numbers as high as these on the Council’s petition site before.

On paper, CEM volunteers gathered more than 50 signatures at collection stands in Fallowfield and in the Northern Quarter. We keep finding that residents, students and workers quickly understand the importance of setting up a scrutiny committee to correct the Council’s historically ineffective climate action. People are ready and enthusiastic to sign.

On the streets, our supporters sent hundreds of leaflets through letter-boxes in multiple wards. We have bold and freshly designed flyers, with a large print run, and we are actively organising a distribution network across the city (do let us know if you can help).

Across civil society, fifteen Manchester groups signed our open letter to call for a climate change scrutiny committee now. The letter signatures demonstrate the breadth of recognition, across Manchester, of the need for much better local governance in response to the climate emergency. 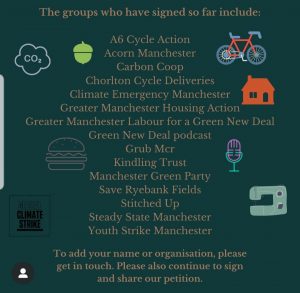 In the media, the petition has been covered by The Meteor and by the Big Issue North. In the latter, the Council have responded to journalistic questions about CEM’s petition campaign by making the frankly absurd claim that establishing a scrutiny committee dedicated to climate change would ‘sideline’ the issue. We think the Council has sidelined the climate emergency for long enough, and that now we need regular discussions about climate change in a dedicated committee.*

On social media, our designer-made images have been getting some love. We’re now adding more content than ever before on Instagram, including neat infographics, thanks to some extra help from a new, social-media-savvy volunteer who recently joined the petition task force.

What’s happening this week and how can I help?

On the streets, we’re scaling up our leafletting and signature collection activities. If you can help deliver flyers in your local area, please let us know (contact@climateemergencymanchester.net). And if you’d like to help us safely collect signatures on paper in the evenings or weekends, when there’s some dry weather, then drop us a line.

Online, you can help us by sharing our images on your social media accounts, to encourage your friends and followers to sign the petition. If you’d like to help us add more content online, do more with Facebook, or create content for TikTok, then we’d be happy to hear from you (contact@climateemergencymanchester.net)

In the task-force, we’re doing more than ever to reach out to schools, universities and employers with information about the climate emergency and the importance of a scrutiny committee. We meet every Friday afternoon at 3.30 for an hour to make plans and build connections. There’s an emphasis on deploying and building skills. If you want to join us, you know the email address!

*The Big Issue North’s coverage provided the first public briefing from the Council on our campaign since August. Back then, Sir Richard Leese made rather odd, dismissive comments. In case you missed them, they can be reviewed through our amusing Sir Richard fact-checking video made by CEM core member Marion Smith. As our Scrutiny Handbook indicates, The Council Executive are wary of scrutiny because it can be embarrassing for them; but for the sake of the climate emergency, and for all our sakes, they need to get over that.

At the moment climate action gets very little real scrutiny. This means mistakes are buried, missed targets are not reported on, etc.

If we get 4000 signatures from people who live, work or study in Manchester City Council’s boundaries, there will be a debate in full council (where all 96 councillors are together) about setting up a seventh scrutiny committee.

We have until November 10th