More than 700 people have now signed the petition for a climate change scrutiny committee online, and a similar number of people have signed on paper. With two weeks to go until the November 10th deadline, we want to push on past 1500 names to get as close as possible to 2000 signatories. Although the original aim of 4000 signatures is now beyond realistic reach, every voice calling for better scrutiny of the climate emergency at Manchester City Council adds important weight to this campaign.

In the remaining weeks, we will be be delivering leaflets door-to-door, highlighting Manchester’s failure to address the climate emergency, and asking ‘can we get that sorted?’. 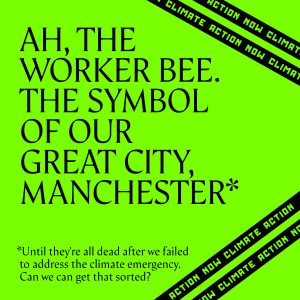 Lots of residents are scanning the QR codes on our leaflets to find out more. If you’d like to help by delivering leaflets in a Manchester Council ward, then please contact us at contact@climateemergencymanchester.net. Leafleting is a good way to develop connections between climate activists and supporters, especially in this pandemic year when leafleting can be a safe, social, physically-distanced outdoors activity to do with a friend or with someone like-minded. Let us know if you’d like to get involved.

Last week, the Manchester Trades Council voted to endorse the open letter calling on Manchester to set up a seventh scrutiny committee dedicated to the climate emergency. Compass Manchester have also signed on to show their support. Receiving support from these diverse groups is heartening, especially from the trade unions that represent so many workers in the city. Yesterday, Manchester Evening News reported on the civil society backing for our campaign. The article highlighted that the Council is failing to meet its much-trumpeted climate targets.

In their comments to the MEN, Council Executive Member Angeliki Stogia did not appear to contest that the Council is deeply off-track when it comes to meeting its promised carbon budgets. Councillor Stogia only sought to reassure the public by stating that reports given to existing scrutiny committees include a section on environmental goals. To this, we say: that’s not enough! Not anywhere near enough.

Even in the Neighbourhoods and Environment Scrutiny Committee, which has the remit closest to our core concern, climate change gets hardly any attention. CEM’s painstaking reporting has revealed this much. Our volunteer citizens’ group does not have the capacity to continually monitor the Council’s five other scrutiny committees, but we would be astonished if the climate emergency is receiving robust scrutiny there (it would be the first we have heard of it). If the Council expects us to take these claims seriously, we need to see evidence of the reports in question, and the ensuing debates in committee. What, when and where? Stating ‘we looked at the “green economy” a while ago’ is an insufficient answer. 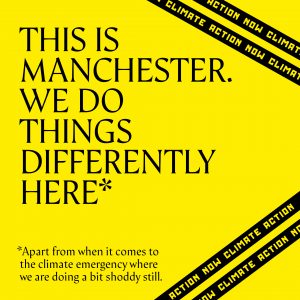 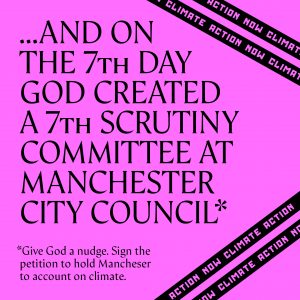 Presented with such weak rebuttal, and amid the difficulties of collecting 4000 signatures during a pandemic, we may well need divine intervention. As our poster says, give God a nudge. Failing that, and for all those who don’t rely on prayer, please nudge your friends and family. Ask people to sign our petition, and we bet that they will do so.

At the moment, climate action gets very little real scrutiny. This means mistakes are buried, missed targets are not reported on, etc.

If we get 4000 signatures from people who live, work or study in Manchester City Council’s boundaries, there will be a debate in full council (where all 96 councillors are together) about setting up a seventh scrutiny committee.

We have until November 10th.